Building individual women scientists’ capacities to develop and lead innovative agricultural solutions is necessary but not sufficient to accelerate Africa’s development. Successes in preparing women in agricultural research for leadership achieved through the AWARD Fellowship were a much-needed impetus to scale up the initiative to institutions.

With only a 10 percent share of female researchers8, Ethiopia has one of the lowest shares of women in research and management positions in sub-Saharan Africa.

Dr. Mandefro Nigussie, the former Director-General of EIAR and now the State Minister in Ethiopia’s Ministry of Agriculture, described how the limited capacity at EIAR to design and conduct gender-responsive research was adversely affecting the potential impact of its work. He cited research for developing a common bean variety that focused on improved yield but overlooked the bean’s prolonged cooking time. This oversight meant that the women in the community had to spend more money on firewood. “Without realizing it, the technology we developed was more harmful to women than it was beneficial.

“The AWARD Fellowship will help us avoid these kinds of mistakes in the future,” announced Dr. Nigussie, a male champion for gender equality.

In 2019, following a partnership agreement with EIAR, AWARD piloted its first institutional AWARD Fellowship. Building upon a 2018 audit of the status of gender considerations in EIAR’s processes, AWARD designed and implemented the customized fellowship to support EIAR’s response to some of the gender audit’s findings. A total of 60 competitively selected researchers participated in the fellowship: half of them were early-career female recruits, and 19 EIAR senior scientists took on mentoring roles, four of whom were women.

Before they can be effective agricultural research leaders, African women must first be scientists of uncompromising quality.

AWARD partnered with the John Innes Centre (JIC) and the Roslin Institute to provide research placements for selected female scientists who participated in the AWARD Fellowship for EIAR. Referred to as Advanced Science Training (AST), the research placements are a fellowship component that seeks to strengthen the fellows’ scientific research skills. 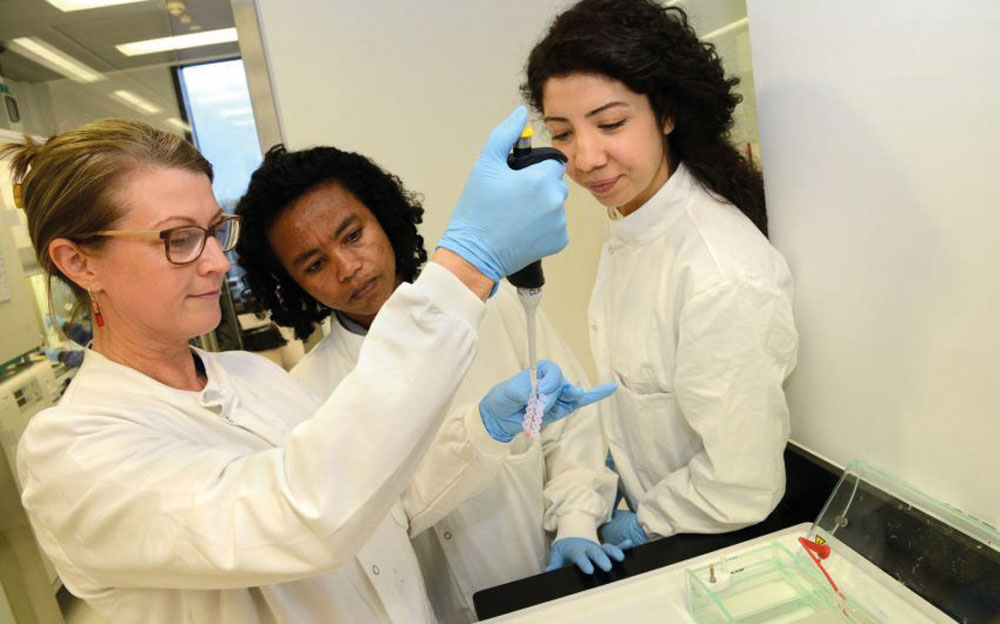 AWARD and Mekelle University in Ethiopia to collaborate on the GRARD initiative, we designed and delivered a learning program on assertiveness and leadership. This training targeted 30 female academic staff to equip them with practical leadership skills. Professor Kindeya Gebrehiwot, immediate former President of the University, said that the training was “a good opportunity to equip the women to fill the leadership gap and empower them to take roles at the leadership and management level.” To deliver these interventions at Mekelle University (and in Ethiopia as a whole), we exploited the AWARD community in Ethiopia, which includes researchers who have experienced and benefited from our investment in building a pipeline of women in leadership. AWARD’s footprint in Ethiopia has reached 144 people from various organizations, including universities, national and international research institutions, and development organizations.

Using a gender lens to increase agricultural productivity in Ethiopia

The gross underrepresentation of women in agricultural research in Ethiopia not only affects adoption of technology in the country where “women farmers perform up to 75 percent of farm labor, representing 70 percent of household food production”9  but also its overall agricultural productivity.

Ethiopia’s government, cognizant of this challenge, is implementing programs such as the Capacity Development Support Facility (CDSF), an initiative funded through a bilateral agreement between the Government of Ethiopia and Global Affairs Canada under Ethiopia’s second Agricultural Growth Program (AGP2).

AWARD partnered with CDSF to build Ethiopian researchers’ capacity to conduct gender-responsive agricultural research in the country. We developed and delivered four training courses to a total of 119 researchers from five research institutions in Ethiopia: